Learn about the Barristers President 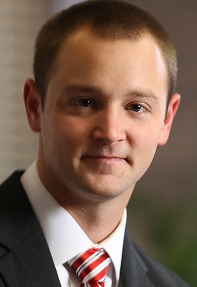 View the Barristers President article from the Feb. DICTA magazine.

How did you initially get involved with the Barristers?
I initially became involved in Barristers during my summers as a law clerk. During the summers, our younger attorneys would bring me with them to get free drinks. Then, when I got out of law school, I continued coming to monthly meetings and began helping in any way I could.

What is your biggest goal for 2019 as president of the Barristers?
I want to continue building better relationships between the young lawyers in the Knoxville Bar.

What is the one thing you wish every lawyer knew about the Barristers?
Everyone should know how much fun the meetings are (They’re Great!) and how many ways our different groups and events help people in the Knoxville Community.

Tell us your favorite things to do when you’re NOT at the office.
Going to Tennessee football and basketball games is my absolute favorite thing. On non-game days, you can find me running the greenway, watching some Netflix with my wife, or heading to one of Knoxville’s great breweries.

Who are your heroes in real life?
John McCain. He lived his life to the fullest and gave his life to serving his country. Senator McCain wasn’t afraid to stand up for what he believed was right and was a true example of a great man and an American hero.